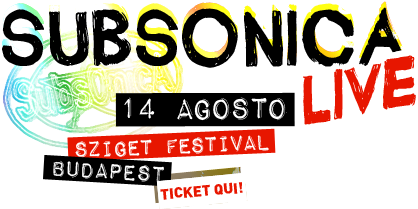 This Summer Subsonica will once again meet the European audience that welcomed them with enthusiasm during the sold-out shows held last year in London, Ibiza, Barcelona, Madrid and Brussels.

The upcoming event will be hosted at Europe's biggest music festival, the Sziget Festival of Budapest, which every year attracts more than 450,000 people with shows organized over 60 stages, hosting the best performers of the international music scene.

Subsonica will perform on the main stage and will be among the main guests, together with artists such as Iron Maiden, Muse, Kasabian, The Hives, Gorillaz Sound System and many more.

Among European bands, Subsonica are certainly one of the most requested from European audiences.